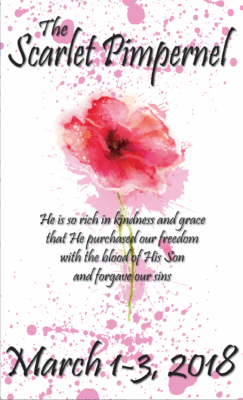 Adapted from the novel The Scarlet Pimpernel by Baroness Orczy

The Reign of Terror saw thousands of lives fall victim to the “National Razor” or “Madame Guillotine.” Heads rolled for conspiracy, for treason, but many were killed simply because of the name with which they were born. In England, the League of the Scarlet Pimpernel and their illustrious leader wished to take a message of hope and forgiveness across the channel to a people in need of a savior. The master of disguise was so good at his craft that the French sent their own champion, the ruthless and crafty Agent Chauvelin, to track and capture the elusive Pimpernel. Chauvelin, who believes in winning at any cost, blackmails his former friend, Marguerite, into helping him discover the Pimpernel’s secret identity in exchange for her brother’s life. Marguerite, a former French actress, is now married to Sir Percy Blakeney who is the one of the wealthiest men in England, but also considered to be Britain’s greatest fool… or is he? Her marriage has already become estranged because of her betrayal in denouncing the Marquess de St. Cyr. Will she again betray or will she find forgiveness in the most unexpected place?